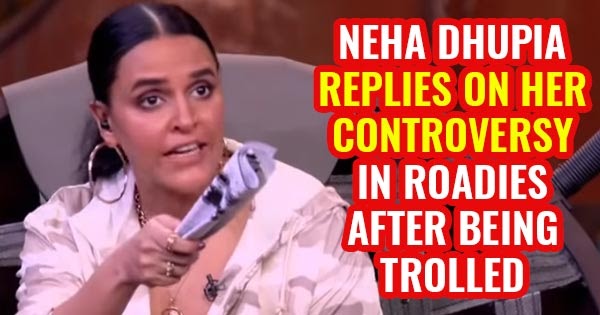 Roadies gang leader, Neha Dhupia, reacts to her controversy in the show and supporting adultery, which lead to trolling.

Neha Dhupia’s statement and reaction to a male contestant in Roadies, which led to huge trolling the actress on social media has been going on for a while now and the actress has finally broke her silence on it.

In a long post shared on her Instagra, Neha tried her best to explain herself. The actress said that adultery/cheating in a relationship is a moral choice that the girlfriend of the male contestant made. Neha said that she doesn’t support cheating but was standing for women’s safety.

Neha revealed that trolls didn’t stop at just trolling the actress on social media but her whole family and staff was targeted for it. Her father’s personal whatsapp received huge number of messages about the controversy as well.

Neha made it clear that she is standing to protect women from domestic violence. Celebrities like Karan Johar, Kiara Advani and Aparshakti Khurrana supported the actress liking her post and comenting on it.

However, the post doesn’t make sense to many people. Because Neha was seen smiling when a girl contestant told that she slapped guys in her relationship, but when the male contestant did the same after finding out that his girlfriend was cheating on him… Neha and fellow gang leaders sepcially Nikhil Chinnappa lost their temper and started shouting and abusing on the contestant.

“Nobody ever said that the boy was ryt in slapping the girl.. ppl are trolling you bcoz you are biased.. when the girl described what she did you were laughing.. and when the boy described only at that time u thought of domestic violence.. that’s stupid,” a user wrote on Neha’s post.