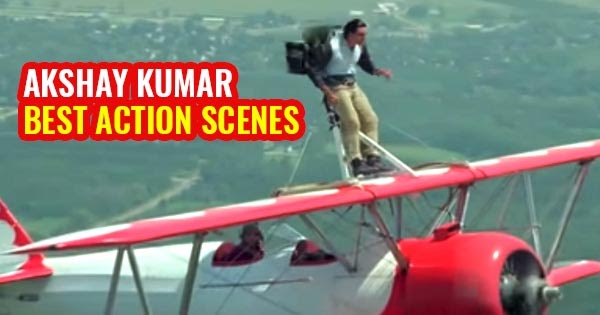 Akshay Kumar is coming back to his action genre with Rohit Shetty’s Sooryavanshi. While the film’s trailer didn’t showcase much of Akshay’s action skills, except his signature scene of hanging down a Helicopter, there is no doubt that this actor is the biggest action star Bollywood ever had and will have.

While after Akshay there has been many stars who top notch action scenes with latest technology, the charm and thrill of Akki’s action scenes was something different. After doing a number of action films with the title of ‘Khiladi’ Akshay earner the title of biggest action hero in Bollywood.

A trained martial artist and chef by profession, Akshay Kumar has shown some great acting skills and comic timing in many of his recent films as well. The 52-year-old star will again be seen doing action on big screens in Sooryavanshi.

Here we have picked some of the best and most thrilling action sequences of Akshay Kumar, which proves why he is the king of action in Indian films.
Read More:-  Sridevi-MOM Movie Press Meet Stills | Saree Pics

Akshay Kumar fighting after setting his own leg on fire.

Akshay Kumar jumping on a parachute off the plane.

Akshay Kumar one on one fight in Khiladiyon Ka Khiladi.

Akshay Kumar jumping before the train passes in Aflatoon.