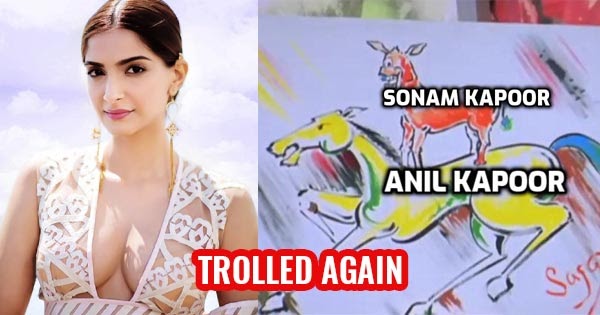 Sonam Kapoor has always been targeted for nepotism in Bollywood and since the suicide committed by Chhichhore’s fine actor, Sushant Singh Rajput, netizens has been showing their protest against nepotism again.

On Father’s day, Sonam Kapoor shared a tweet expressing her love and gratitude to her father, Anil Kapoor, and in some way supporting nepotism. “Today on Father’s Day id like to say one more thing, yes I’m my fathers daughter and yes I am here because of him and yes I’m privileged. That’s not an insult, my father has worked very hard to give me all of this. And it is my karma where I’m born and to whom I’m born. I’m proud,” the actress said in her shared tweet, which made memers take a dig at this fashion diva.

Sonam Kapoor has gained appreciation for her performances in Ranjhana and Neerja, but she is still one of the most trolled and hated actresses on social media. Her tweets, comments and statements has always attracted the trolling on social media. The actress also gets trolled for her grammatical errors by grammar nazis on social media.

Here are some of the memes about Sonam Kapoor on her tweet about nepotism in Bollywood.

Sushant Singh Rajput was not talented

RT if you agree | Add more